Vietnam, Cambodia and the Philippines are projected to have the fastest growing economies in Southeast Asia in five years, according to medium-term projections by the International Monetary Fund (IMF).
In its World Economic Outlook released in Washington Tuesday, the IMF projected GDP growth at 6.9 percent for Vietnam, 6.6 percent for Cambodia and 6.5 percent for the Philippines in 2026.
Among other emerging and developing ASEAN economies, the IMF projected growth rates of 5.8 percent for Laos, 5.2 percent for Indonesia, 5.O percent for Malaysia, 3.6 percent for Thailand, 2.5 percent for Myanmar and 2.1 percent for Brunei.
In the shorter term, Cambodia is expected to be among the top five ASEAN economies in terms of growth in 2022 with GDP forecast to expand by 5.7 percent.
That compares with 6.6 percent in Vietnam, 6.3 percent in the Philippines, 6.0 percent in Malaysia and 5.9 percent in Indonesia.
Growth is projected to be slower at 4.5 percent in Thailand, 4.2 percent in Laos, 3.2 percent in Singapore and 2.6 percent in Brunei whereas GDP is forecast to shrink by 0.1 percent in Myanmar.
For the current year, the IMF forecast Cambodia’s GDP growth at 1.9 percent, reversing a contraction of 3.1 percent last year.
Singapore is expected to be the fastest growing economy in Southeast Asia this year with GDP expanding by 6.0 percent after shrinking 5.4 percent last year.
Among other ASEAN economies, the IMF forecast growth rates of 3.8 percent for Vietnam, 3.5 percent for Malaysia, 3.2 percent for both Indonesia and the Philippines, 2.1 percent for Laos, 2.0 percent in Brunei and 1.0 percent in Thailand.
In Myanmar, however, the economy is forecast to suffer a double-digit decline this year with a steep contraction of 17.9 percent.
Elsewhere in Asia, the IMF forecast growth rates of 8.0 percent for China, 6.4 percent for Hong Kong, 5.9 percent for Taiwan, 4.3 percent for South Korea and 2.4 percent for Japan in 2021.
The overall world economy is forecast to expand by 5.9 percent this year after shrinking 3.1 percent last year. Growth is forecast at 6.0 percent in the United States and 5.0 percent in the Euro Area.
IMF Economic Counsellor Gita Gopinath said the global recovery was continuing. “But momentum has weakened, hobbled by the pandemic,” she said. “Outbreaks in critical links of global supply chains have resulted in longer than expected supply disruptions, feeding inflation in many countries.
“Overall, risks to economic prospects have increased and policy trade-offs have become more complex,” she added.
In most countries, “pandemic-related disruptions to contact-intensive sectors have caused the labour market recovery to significantly lag the output recovery,” Gopinath said.
At the same time, “the dangerous divergence in economic prospects across countries remains a major concern.”
Gopinath, who heads the IMF’s research department, said supply disruptions in the manufacturing sector were another concern.
“On the one hand, pandemic outbreaks and climate disruptions have resulted in shortages of key inputs and lowered manufacturing activity in several countries.
“On the other hand, these supply shortages, alongside the release of pent-up demand and the rebound in commodity prices, have caused consumer price inflation to increase rapidly,” she said.
Gopinath meanwhile called for efforts to avoid “policy accidents” — ranging from a failure to lift the U.S. debt ceiling in a timely fashion to disorderly debt restructurings in China’s property sector to escalating cross-border trade and technology tensions.
“Clarity and consistent actions can go a long way toward avoiding unnecessary policy accidents that roil financial markets and set back the global recovery,” she said.
“Recent developments have made it abundantly clear that we are all in this together and the pandemic is not over anywhere until it is over everywhere.
“If COVID-19 were to have a prolonged impact — into the medium-term — it could reduce global GDP by a cumulative US$5.3 trillion over the next five years relative to our current projection.
“It does not have to be this way. The global community must step up efforts to ensure equitable vaccine access for every country, overcome vaccine hesitancy where there is adequate supply, and secure better economic prospects for all.” 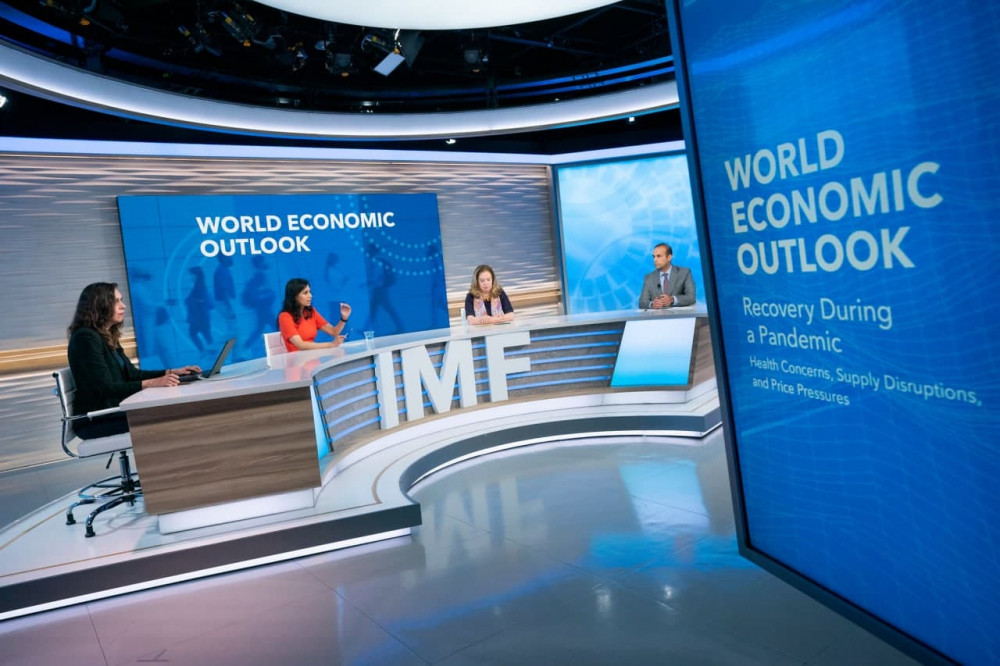