According to H.E. Kao Kim Hourn, Minister Attached to the Prime Minister, the meeting mainly discussed the ASEAN-UN framework as Cambodia is taking the ASEAN chairmanship this year.

Dr. Neoleen Hayzer expressed her congratulations to Samdech Techo Hun Sen on his role as the ASEAN Chair for 2022 and appreciated what he has done related to Myanmar’s crisis.

Dr. Neoleen Hayzer told Samdech Techo that the UN and Cambodia can work together to contribute to the resolution of various issues in the region, especially that of Myanmar.

For his part, Samdech Techo Hun Sen welcomed Dr. Neoleen Hayzer’s nomination as the UN Secretary General’s Special Envoy on Myanmar and reiterated that Cambodia will concentrate on the Five-Point Consensus and ASEAN Charter regarding the Myanmar crisis.

The Premier also briefed her on the outcomes of his official visit to Myanmar last week, saying that “we cannot remain stuck in this situation, we have to find a way to break through this deadlock and, most importantly, to promote negotiations, and we need to work together toward a consensus.”

On Myanmar’s crisis, Samdech Techo Hun Sen said the ceasefire and cessation of violence, and the provision of humanitarian assistance are the top priority, therefore we must work together not only among the ASEAN, but also with other stakeholders, especially the UN.

The Prime Minister also laid stress on Cambodia’s initiative on Troika mechanism to monitor the ceasefire and the mechanism for the provision of humanitarian assistance.

In general, Samdech Techo Prime Minister and Dr. Neoleen Hayzer shared the same idea on the urgent need for a ceasefire and cessation of violence, and humanitarian assistance, as well as dialogue with all parties concerned.

Dr. Neoleen Hayzer expressed her commitment to work with the ASEAN Chair in order to ensure that the situation in Myanmar does not get worse.

Samdech Techo Hun Sen encouraged Dr. Neoleen Hayzer to work with H.E. Prak Sokhonn, Deputy Prime Minister, Minister of Foreign Affairs and International Cooperation of Cambodia and Special Envoy of ASEAN Chair on Myanmar, to facilitate and promote cooperation between ASEAN and the UN in order to find a solution to the Myanmar crisis. 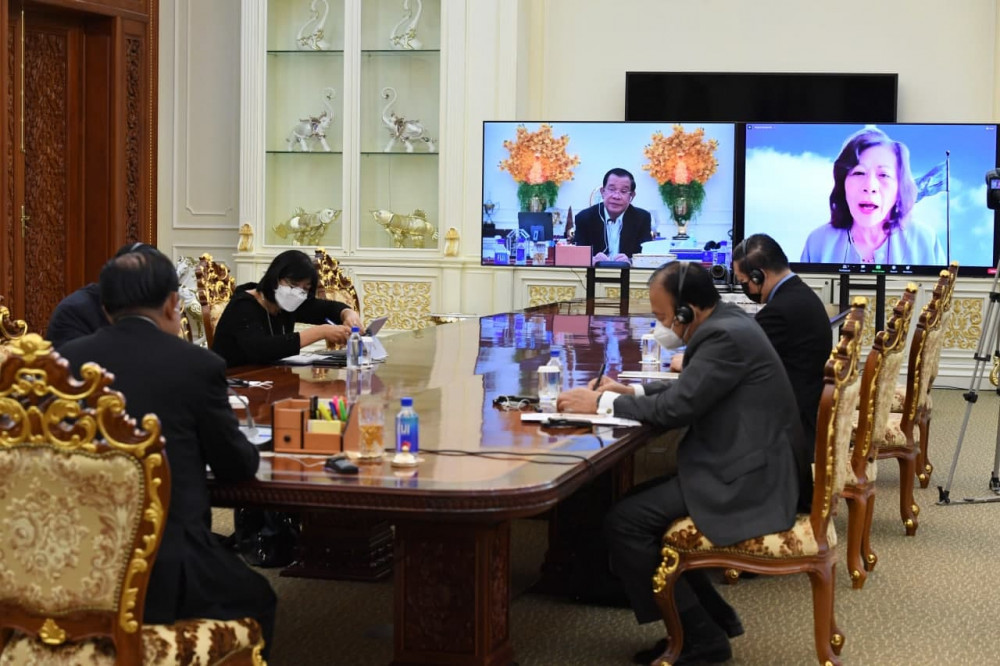